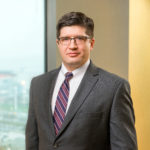 Weston Hurd LLP is pleased to announce that JOSHUA M. MIKLOWSKI has been named a Partner of the Firm.

In addition to the Ohio Bar, Josh has admission before the United States District Courts for the Northern and Southern Districts of Ohio and the United States Court of Appeals for the Sixth Circuit. Within the legal community, Josh served as Vice President (2019-2020) of the Cleveland Association of Civil Trial Attorneys and is a member of the Ohio State and Cleveland Metropolitan Bar associations and the Cleveland Employment American Inns of Court.